by The Deadstock 33s, Stopmakingme 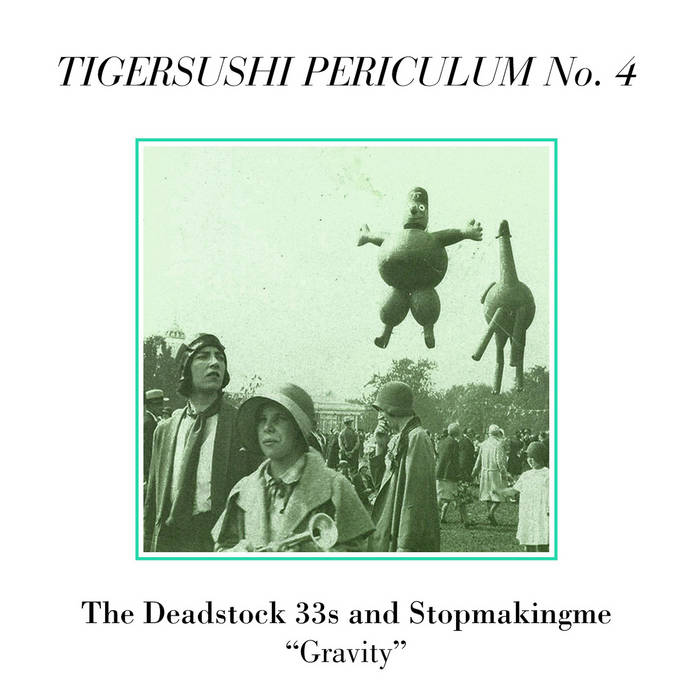 The latest release from Joakim's Tigersushi record label sees The Deadstocks 33s collaborating with Stopmakingme for an EP of 4 lush, sometimes Balearic sounding slabs of proto House dance music. Straight off the back of Crackboy's EP, and Joakim's debut single from the new album, 'Gravity' compounds the summer mood of Dance Music, joining the ranks of artist Gatto Fritto and Soulclap.
For the very few of us in the world that donʼt live in London this might be a good moment to talk a little about our artists. Deadstock 33s is the brainchild of Justin Robertson, possibly a living legend in British Dance music. Of his credentials we can find a long serving residency at the Hacienda alongside Sasha and Mike Pickering. Outside of the Hacienda, you could find him doing his bit for Baleric with Most Excellent, a club night that the Chemical Brotherʼs often cite as their classroom and Justin as their mentor. Never one to stay still Justin formed the group Lionrock combining house music and dub sensibilities, scoring several chart hits, but more importantly remaining at the forefront of what is now known as Progressive House whilst often being cited as an architect of the sound. It is these credentials that justify any-bodies adulation for this artist, let alone Dan from Stopmakingme : "Justin Robertson was a name I had heard loads about growing up. His name was always cited next to some of my heroes, like Weatherall, who had made names for themselves since the early days of Acid House by playing amazing music from the dustiest corners of their record collection in big clubs. The more I learned about him, the more I realized this guy was the real deal. Skip forward a few years and his Deadstock 33s records are a major staple in my sets. A message from the man himself saying he liked a remix of mine was enough to make me smile for about a week. We got talking and soon realized our tastes crossed over in so many different places. Hawkwind and New Order mean as much to us as Carl Craig or The Emperor Machine. This is what we really wanted to push with the music we started to make together and it is with much excitement that I can play this EP to my friends from home."
Stopmakingme aka Dan Avery is not as green as it might appear when greeted with the fresh-faced young lad that stares back at you from his website. Having started one of Londonʼs most influential Indie-Dance cross over clubs Kill Em All, Let God Sort Them Out and a record label Kill Em All with partners the Filthy Dukes, it is fair to say Dan has cut his teeth with some of the bigger and more respected names in the UK scene. Djing helped inform the art of the remix with Hercules & Love Affair, DFA 1979, Metronomy, Black Devil Disco Club, In Flagranti and Munk some of the artists he has had the opportunity to re-imagine. Danʼs own releases Rattle Gang 12ʼs and Kill Em All helped catch the attention of some of his piers, not least partner Justin : "one of the best producers around, an adventurer with an open mind. Dan has no qualms in mixing the influences he loves into something beguiling and new, his sound is fresh and yet instantly classic, our times in the studio are frantic with enthusiasm for sounds from psych to elongated electronica , we've tried to capture that joy here, hope you dig"
If all of this seems to be rather grandeurs for a debut PR then simply turn to the music. With the ʻHeavyʼ EP this is something that we are not shy on, with 4 tracks of original music, culminating in over 24 minutes of forward- thinking Dance music.